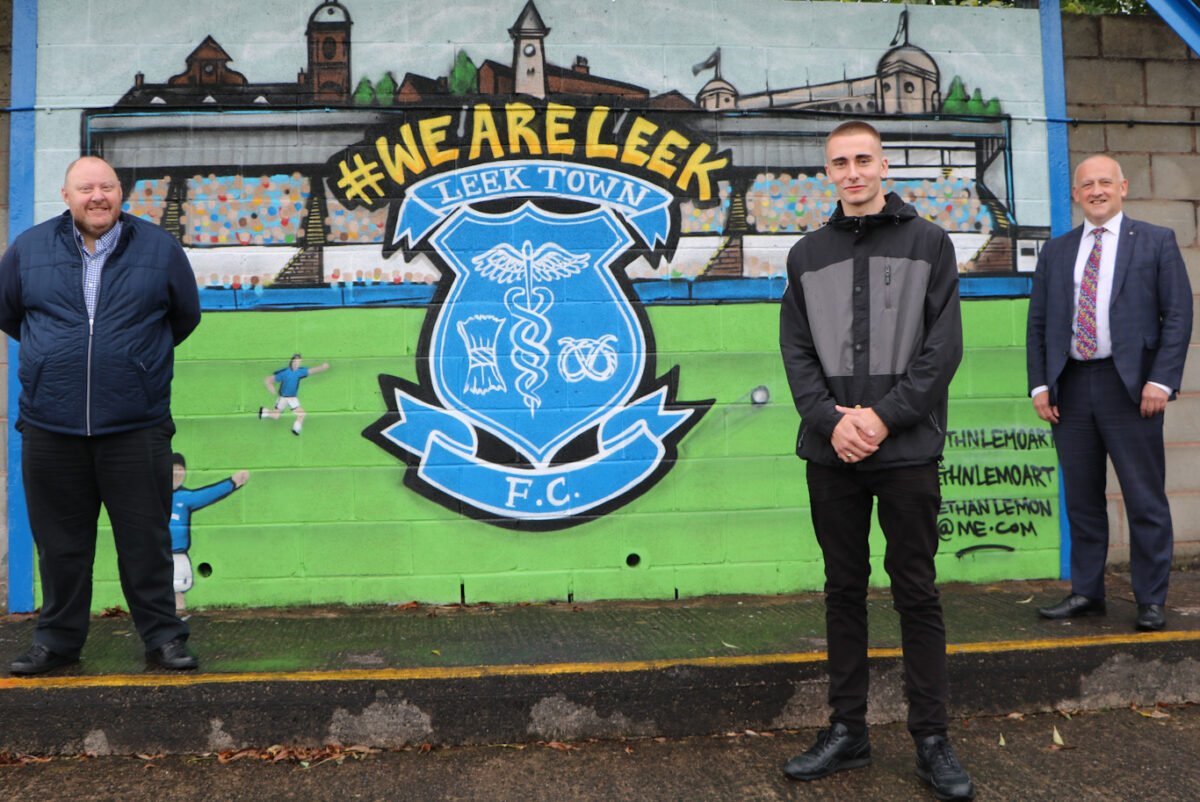 A graffiti artist from Biddulph been invited by Leek Town FC to ‘do a Banksy’ inside the ground.

Ethan Lemon, 19, from Biddulph has been running his own business, Ethn Lemo Art for over a year.

Ethan had met Leek Town Chairman Jon Eeles at Leek based business networking group, Gone Fishing 4 Business. Jon was impressed with Ethan’s portfolio of work and invited him to the club to explore the possibility of a graffiti installation.

Jon Eeles said: “We’ve got some pretty drab concrete fencing around a part of the ground and I thought it would not only brighten up the space but would create a great feature and talking point.”

The mural features local landmarks, the Nicholson War Memorial and Nicholson Institute as well as the twin towers of the old Wembley Stadium where Leek Town were runners-up in the 1990 FA Trophy final.

Ethan is on the Princes Youth Trust Enterprise scheme. As part of the scheme has a business mentor who helps with all aspects of business development. Ethan has been working with his mentor, Jed Eatough, director of Leek based LSGK Accountants for a year.

Jed has been encouraging Ethan to get out and network with other businesses to broaden his business contacts. As a direct consequence of networking Ethan has already secured the exhibition at the Foxlowe Arts Centre Café and now the work for Leek Town.

Ethan said: “I’ve really enjoyed painting the mural at Leek Town and I am guaranteed great exposure as thousands of people visit the stadium throughout the year.

“This has all been through networking and I have been fortunate to be exposed to really supportive businesspeople through my connection with Jed and the Princes Trust.”

Jed Eatough added: “Introducing Ethan to fellow businesses forms a big part of his development and it has obviously already paid dividends.

“Ethan has an obvious artistic talent and is also starting to get to grips with building a very successful business.”